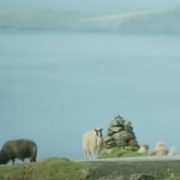 Yes, you did read the title of this post correctly. It’s about a surprisingly creative idea that Visit Faroe Islands have had in order to promote tourism in those islands, a stunning landscape but very far from the usually beaten path, so far that not even Google Street View had discovered it already.

In order to solve the lack of visibility of the Faroe Islands, a young woman and her friends have had the crazy but – I promise – very engaging idea to equip some sheep with a 360 degree cameras powered by solar panels. The sheep, while wandering through the islands, are automatically uploading pictures on Google Street Views, so giving birth to the first “Google Sheep View” release. Don’t you believe me? Have a look at the video.

Very interesting and creative way to solve a lack in visibility for a country, don’t you think?

Other posts about traveling

Attitude is important
Scroll to top